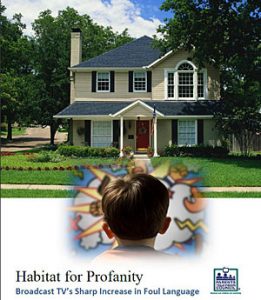 LOS ANGELES (BP) — Four months after an appeals court struck down the Federal Communications Commission’s broadcast standards, a new study shows that profanity on broadcast television has risen nearly 70 percent in the past five years.

The study also reported that harsher profanities are now being used, and it added that the “greatest increase in the use of the harshest profanities” took place during the 8 p .m. Eastern period — often known as the “family hour” — and at 9 p.m. Eastern.

In July, the U.S. Second Circuit Court of Appeals ruled that the indecency policy the FCC uses to monitor offensive language is “unconstitutionally vague.” The decision is being appealed. Conservative groups at the time expressed concern that the ruling would lead to an increase in TV foul language.

“The statistics and examples in this study demonstrate that, freed of regulation in the wake of the Second Circuit Court’s  of the FCC’s powers of enforcement,” the study said, “Hollywood’s ‘creative’ personnel and their TV network distribution outlets have deliberately unleashed literally unparalleled levels of profanity and graphic language upon the public — the most egregious of it in a timeslot in which children are most likely to be in the audience.”

The Parents Television Council noted that the lawsuit that led to the Second Circuit’s decision involved several instances of “fleeting expletives” on live TV by celebrities such as Cher and Nicole Richie. The study, though, found that scripted programming was the big problem.

“A 69% increase in scripted profanity on pre-planned, filmed entertainment is not equivalent to a couple slips of the tongue during live events,” the study said. “The statistics above demonstrate that use of such language by the networks is both deliberate and pervasive.”

Among the study’s other findings:

The Parents Television Council listed several recommendations. The FCC must “vigorously” pursue its appeal in the case and must also “call on the networks to consider the public’s interest before that of their so-called ‘creative’ employees.” Advertisers, too, must hold the networks accountable, the PTC said.

“If the Supreme Court ultimately should eliminate the FCC’s power to regulate program content, will profanity, depictions of explicit sex, and scenes of graphic violence, increase without limit?” the study asked. “What guarantees do the networks offer the American people that, once freed of all governmental oversight and regulation, they will use the airwaves responsibly? The broadcast networks can — and should — freely choose to maintain standards of common decency, rather than seeking every opportunity to push graphic and gratuitous content onto unsuspecting viewers.”

The rise in TV profanity has resulted in some companies creating products to assist parents. One company, TVGuardian, sells a device that mutes foul language on television.